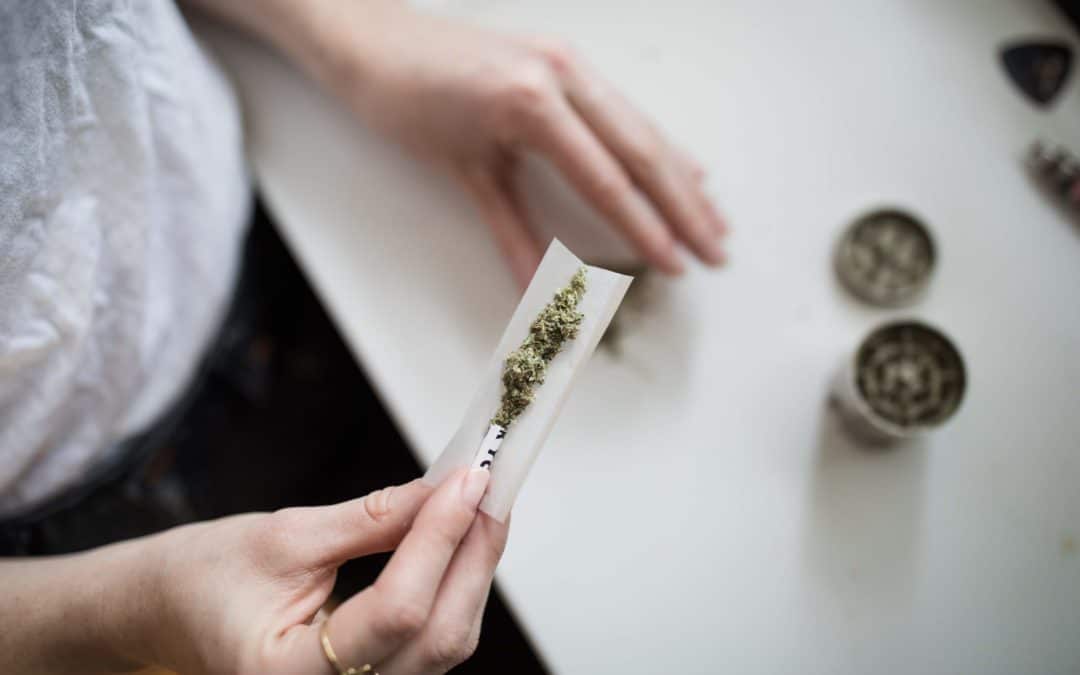 How Cannabis Could Help Deal With Hangovers

Who in their life doesn’t hate hangovers? We’ve all experienced them in our time, whenever we go out to drink with friends or spend a night out, we are sure to be hit with a stressing hangover the day after. When we are young, the effects don’t cause as much distress on us, but it gets way worse as we grow old. When struggling with a hangover, most people will turn to Advil and water, and try to eat as much as they can to lessen the effects. However, did you know that cannabis could lend a very valuable hand in overcoming hangovers too?

So far, cannabis has performed very successfully with people under all kinds of unpleasant effects and conditions. For one, cannabis is very helpful in cutting down nausea, which can be very valuable when getting through a hangover. That way, ingesting copious amounts of water and eating as many sandwiches as you can will be a lot easier. Many people who have tried this method, have managed to cope with their unpleasant hangovers much better.

However, although there are many accounts of what cannabis can do to alleviate someone’s hangover after a night out, there still aren’t many studies available that can confirm cannabis is a viable solution. So far, most of the evidence is simply anecdotal, which is why so many researchers consider that cannabis has no medical reliance as a cure to hangovers. We can only hope that doctors grow more curious as time goes by, and more and more consumers attest to its effectiveness in cutting down hangovers.

Let’s examine for ourselves what both the research available and the anecdotal evidence suggest, and whether cannabis could help us deal with hangovers. 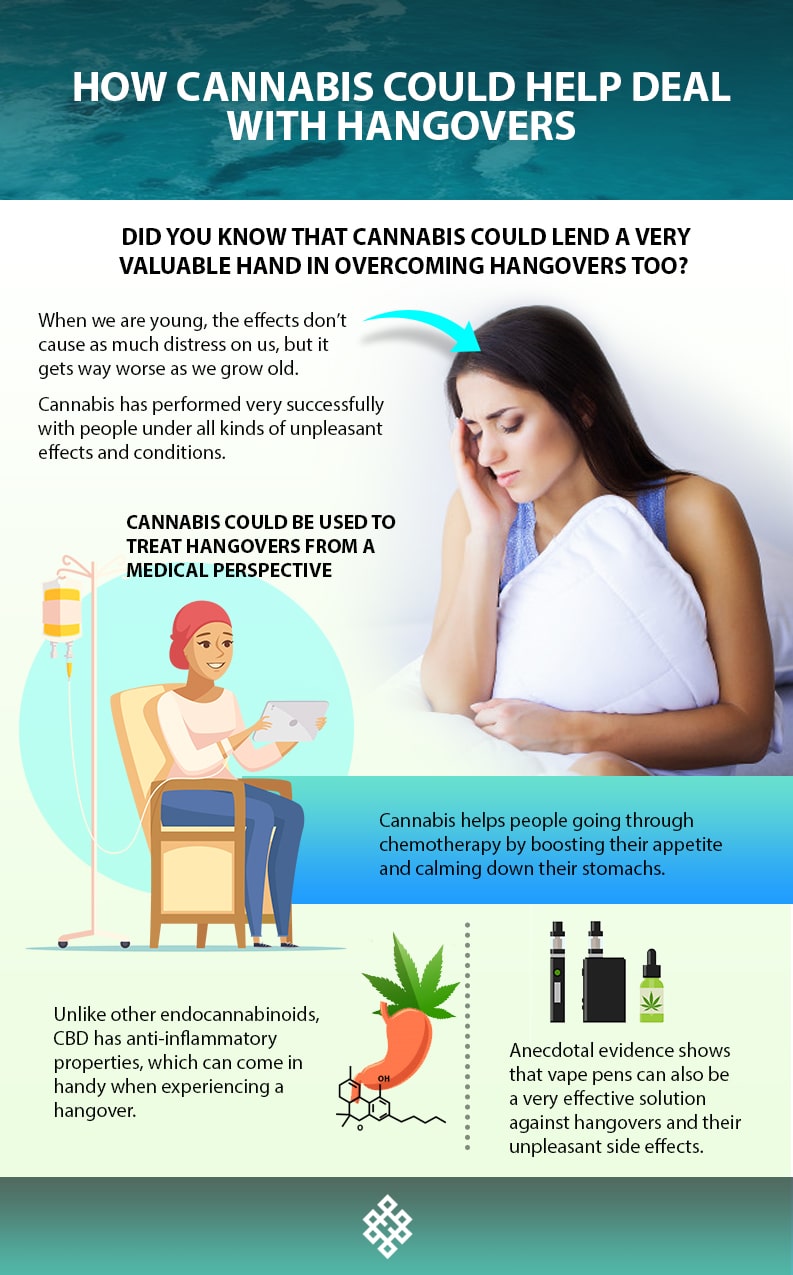 Cannabis Could Be Used To Treat Hangovers From A Medical Perspective

Even though scientific data and research are still very lacking, doctors agree that cannabis could help with some of the side effects hangovers have. There are cannabis receptors in the gut, as well as the areas of the brain that can boost appetite, nausea, or vomiting. With adequate cannabis consumption, you could trigger some of these receptors to make sure that the hangover’s effects are downplayed.

Doctors often claim that they don’t know how the cannabis mechanism would work in treating hangovers. However, there is a growing consensus that the method could work more or less like with chemo patients. Cannabis helps people going through chemotherapy by boosting their appetite and calming down their stomachs. So, in comparison, cannabis could lend a hand to people struggling with a hangover in a similar fashion. What makes doctors sound a bit skeptical when it comes to this practical solution, is why exactly cannabis could cut down hangovers. They still can’t find an answer to that question, and until they do, they will probably refrain from prescribing cannabis as a cure for hangovers.

As of now, there are many professionals from the cannabis industry who push for creating more products for curing hangovers. These entrepreneurs are aware that cannabis can help lessen most, if not all, of the unpleasant side effects hangovers have. After all, cannabis can cure headaches and nausea in patients suffering from all types of illnesses, so the same can be applied for hangovers. Since cannabis consumption increases appetite, people struggling with a dreadful hangover will find it easier to metabolize the copious amounts of alcohol in their bodies.

Another major quality cannabis has that can cut down hangovers is that it expands blood vessels. This can help clear up any headaches a lot faster, thereby alleviating the unpleasantness of a hangover. Anyone who has a bit too many tequila shots after a night out will find that cannabis relieves them of their symptoms. This is also true for migraines, so if you are experiencing a very strong migraine as a result of a hangover, or due to stress, it will work just as well.

CBD in particular has many valuable traits that make cannabis a successful way of counteracting a hangover. Unlike other endocannabinoids, CBD has anti-inflammatory properties, which can come in handy when experiencing a hangover. Without looking for a psychoactive THC high, you can gain many benefits from a cannabis dose heavy on CBD to deal with the effects of a hangover.

Experts are still not clear on which is the best cannabis delivery method for cutting down a hangover. However, anecdotal evidence so far shows that smoking is perhaps both the easiest and safest method to cope with the aftermath of a hangover. There are people who can’t get over the fact that smoking can relieve them of their stomach illness and overall nausea. If you fear smoking may increase the urge to vomit, then you should try cannabis teas or edibles, which could also lend a huge hand.

There are many tea brands out there, including those sold by Haven, that can alleviate you of any unpleasant hangover symptoms. Some of these formulas have features such as tumeric and ginger, aside from the standard cannabinoid content. This can help your stomach get settled, and overcome the nasty state of a hangover. There are other formulas that also feature caffeine, which will come in handy when dealing with a dreadful headache or migraine. If dealing with headaches and nausea is not enough for you, then you will also be able to regain sleep by ingesting one of these comfy cannabis solutions.

Anecdotal evidence shows that vape pens can also be a very effective solution against hangovers and their unpleasant side effects. However, for many users, edibles work even better. Unlike vape pens, edibles deliver a full-body high and not just a head high. When you experience a hangover, basically you get affected all throughout your body. Therefore, you want the cannabis solution you take to be able to attack all of its effects simultaneously. This is why an edible might work better for you. In the end, both consumers and doctors agree that no strain is 100% guaranteed to work against a hangover. What makes the difference is the personal preference for a specific formula.

2 thoughts on “How Cannabis Could Help Deal With Hangovers”